It is believed that Dr Joseph Thompson imported a brown female named Wong Mau into the U.S.A.  from Burma in early 1930’s and with other breeders began a breeding program  from which the Burmese was established as a distinct breed. 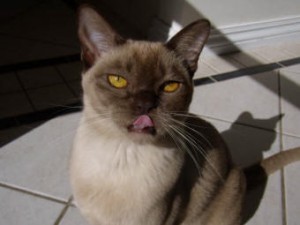 APPEARANCE The Burmese is a compact cat with a round head and  wide-set expressive golden or yellow eyes, and ears of medium size set well apart and a tapered tail. They are of medium size and  have short silky coats, are elegant and carry surprising weight for their size.  When mature the males are larger than the females who are more delicate and graceful, the difference in weight can be up to a kilo. 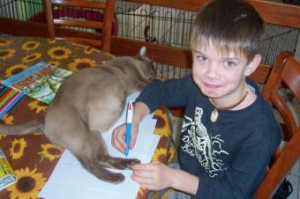 PERSONALITY Burmese are extremely people oriented. They are intelligent, friendly, inquisitive cats with a loving nature, vocal, active and playful. It has been said that they are more like dogs than cats in their behaviour. Their love is unconditional, they are an upfront cat – in the middle of everything – you cannot ignore them, anything that moves makes a good game. They love helping you, making beds (getting under the sheets), getting into cupboards, helping read the paper (usually by sitting on it), and they love talking to you (they look you in they eye and answer when you speak to them).  They are great with children and will happily play with them, and will usually get  along with the family dog.

The social nature of the Burmese does mean that they need company – human and feline –so if you work and are away during the day getting two is a good idea, ideally from the same litter, that way the stress of moving is halved.

As kittens the Burmese are well known for their inquisitive nature and are quite clumsy, often trying to attempt feats beyond their capabilities. Their intelligence becomes apparent as they grow older and without you realizing they train you with those big innocent and seductive eyes and soft sweet voices. 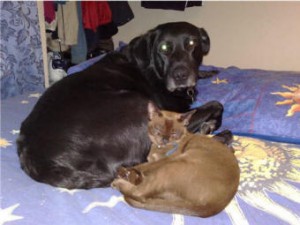 They will also enjoy travelling in the family car if introduced at an early age.

The females like to be the centre of attention and take an active role in ruling the household.

The males are more laid back and prefer to supervise from your lap.

LIFESPAN Twelve to sixteen years is the average but I have spoken to people who have had them for up to 23 years.